Comedy, Drama, and Insight from the Old and New Testaments

Christian performers Ted and Lee are known for their deft balance of the hilarious and the profound. Saint Mary's Press is excited to bring their energy and creativity to the Catholic world. Creation Chronicles on Stage and Fish Eyes on Stage will entertain you, challenge you, and maybe even change the way you read the Scriptures. Use these DVDs to introduce a class or study group to the Old and New Testaments, provoke discussion on specific biblical stories, or start a movie night, retreat, or miniseries that people of all ages will relate to.

Creation Chronicles on Stage
Comedy, Drama, and Insight from the Old Testament
Through 14 scenes imaginatively reenacted by Ted and Lee, laugh with God as he creates flyers and hopping things, feel God's pain as he contemplates destroying the world with a flood, and smile as Solomon gives advice to a love-sick young man.

Fish Eyes on Stage
Comedy, Drama, and Insight from the New Testament
These 11 scenes give fresh insight on the Gospel story through the eyes of Peter and his brother Andrew. From a bumper crop of fish to the despair of Peter's denial, these familiar Gospel stories help us to see these simple fishermen as real people, hip-deep in miracles, parables, questions, and ultimately faith. 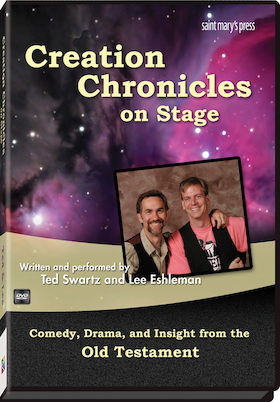 Comedy, Drama, and Insight from the Old Testament

Strap yourself in for a wild ride through the Old Testament as imaginatively reenacted by the comedy-drama team of Ted and Lee. Laugh with God as he creates hoppers and flying things. Feel God's pain and disappointment as he contemplates destroying the world with a flood. Smile as Solomon gives advice to a lovesick young man.