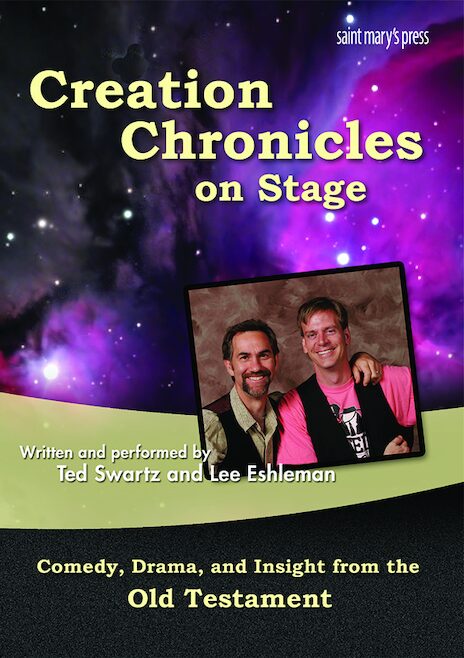 Comedy, Drama, and Insight from the Old Testament

Strap yourself in for a wild ride through the Old Testament as imaginatively reenacted by the comedy-drama team of Ted and Lee. Laugh with God as he creates hoppers and flying things. Feel God's pain and disappointment as he contemplates destroying the world with a flood. Smile as Solomon gives advice to a lovesick young man.

The digital video contains 14 scenes which can be shown together as one long performance or used independently to highlight particular stories. A leader's guide is included.

Whimsical, tongue-in-cheek humor, at times hilarious, at times corny, authors and actors Ted and Lee depict Peter and his brother Andrew as they fish, attend the Wedding at Cana, experience the Sermon on the Mount, the feeding of the five thousand, Jesus walking on the water, the Transfiguration, the entry into Jerusalem, the Last Supper, including the foot-washing, the arrest of Jesus, Peter's denial, the Upper Room, and the miracle of the fish. The timing between Swartz and Eshleman is spot-on.

Scripture Reimagined
Ted and Lee artistically have interpreted the Old Testament narrative and the Gospel in these two DVDs in a quirky, yet thoughtful way.

With strong performances, their journey through the Old Testament in Creation Chronicles is a brilliant trip through the highlights, retelling the stories of creation, the flood, Jonah and more.

Fish Eyes, on the other hand, takes the viewer through the Gospel in hilarious and thought-provoking ways. While I love both, of the two I enjoyed Fish Eyes more; but both are worth the cover price.

While each DVD comes with a sturdy guide, it's not much more than a breakdown of the Scriptures referenced in each video chapter and one or two discussion questions. While I would have liked to have seen a stronger guide, I'll definitely be using these videos in the years to come.

Reprinted with permission from the March/April, 2009, issue of YouthWorker Journal, http://www.youthworker.com.

Face to Face in Scripture Stories
I finally had a chance to use these guys with adolescents and, while I found the youth to be engaged, it was the response of the adults that amazed me. In fact, several of the catechists who were facilitating the Confirmation retreat with me talked of purchasing their own copy of the DVD. While I only used the New Testament DVD, Fish Eyes on Stage, "Peter" and "Andrew" had me believing they really had met Jesus. I have enjoyed the "Comedy, Drama, and Insight" from Ted Swartz and Lee Eshleman in their Old Testament DVD entitled Creation Chronicles as well.

Fish-Eyes On Stage! won a Telly Award and an AXIEM Award for excellence in video production. It is also closed-captioned. . . .

Passionate performances by Ted and Lee carry the story into moments of unexpected wonder, laughter, and meaning. . . .