This Lectionary-based prayer reflection can be used with teens or adults to celebrate the Epiphany.

Isaiah foretold that nations would gather to follow the light and offer gifts. The story of the Magi has glamour, danger, and courage. It is a story of accepting the journey to an unknown place; following the star because of faith. And it is a story of Gentiles coming to visit Jews, bringing gifts, and being welcomed.

A star, or a tray with gold (jewelry), frankincense (incense), and myrrh (skin oil)

In the story of the Magi we are dealing with an extraordinary child. The star is so brilliant that astrologers follow it in faith--not knowing who they will find, but needing to make the journey. "Following a star" has become a metaphor for following your dream, pursuing your calling, or making an ideal you believe in become a reality.

The ones who had faith and followed the star to worship the newborn Messiah were not Jews but Gentiles! It was unheard of for Jews and Gentiles to mix, but these Gentiles came, brought gifts, and were welcomed into the home.

The astrologers in the Magi story went through quite a journey in search of the baby Jesus. They obviously believed in him and had faith in the star.

The gifts brought by the Magi have significance. Gold is a symbol of wealth and fidelity. Frankincense is burned to purify the atmosphere by releasing an aromatic and pleasing smell. For centuries, Native Americans have burned holy smoke in order to bless and purify themselves, and monks have watched incense rise to the sky as a symbol of their prayers ascending to God. Myrrh is a kind of resin or oil used for anointing and embalming. It is a symbol of comfort and soothing (who doesn't enjoy a rubdown?) but it is also a foreshadowing of death.

Once they saw a star
that pointed to a promised land,
to a land of peace.
Peacemakers set out to follow that star.

It is both a joyful and arduous journey.
Sometimes the star shines brightly,
the promise seems certain,
and the pilgrims can sing,
"How beautiful are the feet of those
who bring God's peace."
Often the star disappears,
clouded over, hidden from view,
and the pilgrims grope blindly,
grow discouraged, get weary,
give thought to settling down,
to forgetting the promise of peace.

One thing is certain:
all pilgrims need nourishment
to sustain the journey.
An occasional oasis for the spirit
is essential,
a time to feast on the refreshing waters,
the rich food of the spirit
in order to get strength
to continue the pilgrimage through darkness,
star-shine or not.

(This poem is taken from In Touch with the Word: Lectionary-Based Prayer Reflections for Advent, Christmas, Lent and Easter, by Lisa-Marie Calderone-Stewart [Winona, MN: Saint Mary's Press, 1996], pages 70-72. Copyright © 1996 by Saint Mary's Press. Permission is granted for this prayer to be used for classroom or campus ministry purposes. This prayer may not be republished in any form without written permission from Saint Mary's Press. To order this book, contact Saint Mary's Press at 800-533-8095, or visit our online catalog at www.smp.org/catalog.cfm.) 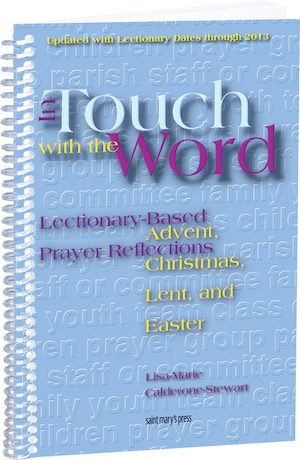 In Touch with the Word: Advent, Christmas, Lent, and Easter