He was born Angelo Giuseppe Roncalli in Italy. Later he became known as "Good Pope John." During his lifetime, the world experienced two World Wars, the rise of communism, and the Holocaust. In the Church, there was fear of the modern world. Yet John XXIII embraced the world and called it "his parish." When he became pope at almost 77 years old, many thought he would be a transitional leader, making little change in the Church. Yet, in his five-year papacy, he revolutionized it. In 1962, he gathered all the bishops of the world in Rome. He also invited religious leaders, scholars, women, and even the news media. This gathering began four sessions called the Second Vatican Council. He wanted the Church to read the signs of the times and work for unity and peace within herself and with the entire modern world. He died after the first session. Yet what he began changed the way the Church prayed. It changed how it understood itself and the world. John XXIII paved the way for John Paul II, the ultimate "media pope," by being the first to welcome TV crews to the Vatican. He let the world see for the first time how the Church worked. Like John Paul II, he also had a sense of humor. When asked how many people worked in the Vatican, he said, "About half." John XXIII was beatified in 2000, and canonized in 2014. We celebrate his feast day on October 11, the day the Second Vatican Council began. (Taken from "The Catholic Connections Handbook for Middle Schoolers.") 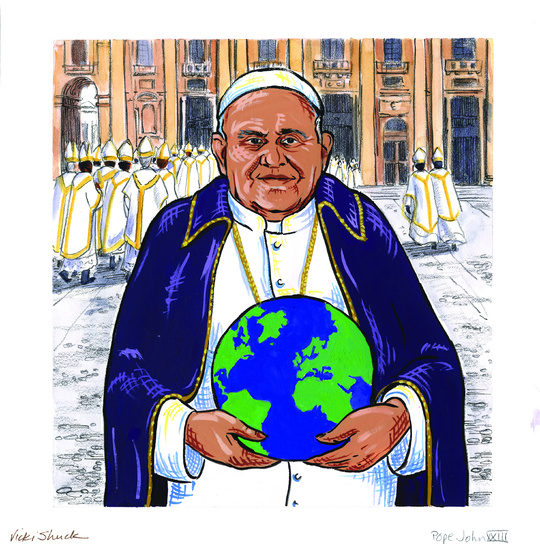 "Turn away from evil and practice good; seek peace and follow after it" (Psalm 34:14). Simple words, but such profound advice! We are counseled not only to seek peace but to pursue it. How willing are you to put your energy into making peace? Do you need to make peace with anyone? How can you seek peace with her or him? (Taken from “Good News Day by Day: Bible Reflections for Teens.”)

God, help me to be a peacemaker who actively pursues peace in all areas of my life. May I always strive to do what is peaceful. (Taken from “Good News Day by Day: Bible Reflections for Teens.”)