Saint James and his brother Saint John the Apostle were two of Jesus' Twelve Apostles. Jesus first encountered James and John while they were fishing with their father. After joining Jesus, James and John were among Jesus' closest disciples. James was present at Jesus' transfiguration and in the garden of Gethsemani. In the Gospel of Matthew, after the mother of James and John asks if the brothers may be seated at Jesus' right and left sides in the afterlife, Jesus instructs the disciples on the importance of service, sacrifice, and humility. James and John both confidently proclaimed their allegiance to Jesus' message of love and service. Their confidence proved well-founded, as Acts of the Apostles tells of King Herod killing James, making him the first of the Apostles to be martyred. Saint James is the patron saint of Spain. There is a special pilgrimage to the Cathedral of Santiago de Compostela in Galicia, Spain, where his remains are said to be buried. This pilgrimage is called the "Way of Saint James." 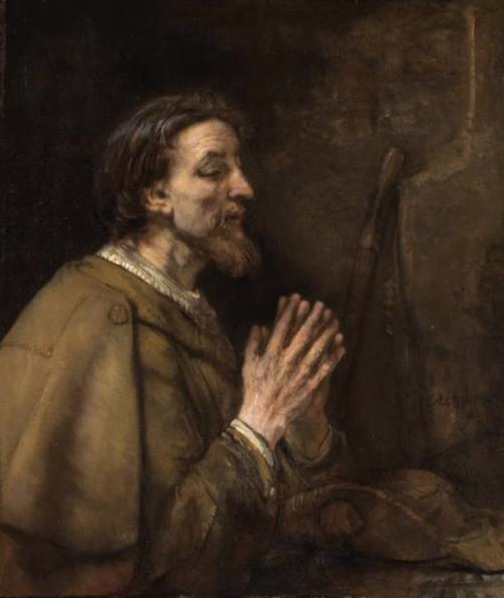 Like many of us, James wanted to be famous and to be held in high esteem. He wanted to sit next to Jesus in heaven. Jesus, however, reminded his Apostles that they should not desire to be the greatest. Rather, they should desire to serve and to love others and should be completely indifferent to their importance or rank. In what areas of your life are you prideful and greedy? Can you work to be more humble and to focus less on your ambition and achievements and more on your dedication to loving and serving the people in your life?

Although initially struggling with his overwhelming ambition, James eventually embodied the loyalty, faithfulness, and courage to die for his faith. As the first Apostle to be martyred, James set an example of the completely selfless and sacrificial love required of Christians. Pray to Jesus and ask him to show you how you can embody his sacrificial love in your life. Request that he provide you with the courage of Saint James.