Saint Camillus of Lellis was a big, burly man. He was "hasty of temper," and such a ferocious and bad gambler that he eventually lost everything he owned and had to go to work digging ditches and building houses. From age 17 to age 25, he was a soldier. He converted to a life of service to the sick after hearing a sermon, perhaps preached by Saint Philip Neri. Camillus, who limped all his life because of a bad leg, found work in a hospital in Rome. At the hospital, he rose to be a bursar, or bookkeeper, and finally found his niche in nursing, for he saw how badly patients were treated by the nursing staffs of the time. By the year 1600, when he was 50 years old, he had founded an order of priests and lay brothers called the Servants of the Sick. He established the first mobile nursing unit that was sent to troops in the field, and insisted on open windows and decent food for patients as means of improvement. He died in 1614, still big and burly but no longer hasty of temper, and we honor him today as the patron saint of nurses and patients. 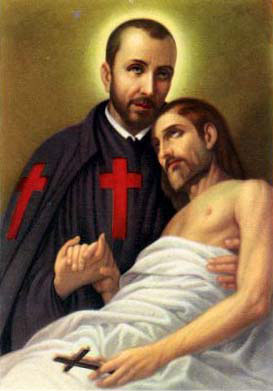 Saint Camillus is a wonderful example of a man who turned his life around. He was on a destructive path until he found joy in ministering to those in need. Sometimes it is difficult and scary to help the sick or disabled. However, these people greatly need to be shown the love and compassion of God. Do I help those who are sick, suffering, or forgotten?

Dear Lord, please help me to not have a hasty temper, and to show love and compassion to those who are sick, suffering, or forgotten.