Between 1648 and 1930, 87 Chinese-born Catholics and 33 non-Chinese-born Catholics, mostly priests and women religious, were martyred by Chinese authorities. Many died during the Boxer Rebellion, in which Chinese citizens afraid of Catholic influence murdered thousands of Christians. The martyrs mentioned above refused to renounce their Catholic faith. Saint Augustine Zhao Rong was a Chinese solider who escorted a bishop to his martyrdom, only to be so moved by the example of the bishop that he converted to Catholicism, became a priest, and was martyred in 1815. These saints were canonized in 2000. 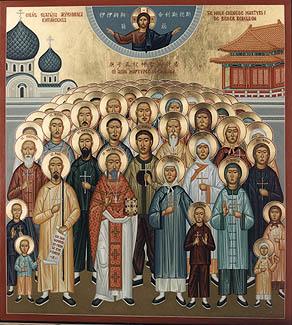 St. Augustine Zhao Rong and his fellow martyrs are a powerful tribute to the sacrifice of Christians and to the courage of humans trying to assert both their faith and their right to choose their own faith. When we read of such heroes, it is important to remember that they do not exist solely in antiquity--there are, at this very moment, thousands of Christians around the world asserting their right to choose their faith against violent oppressors who want them to denounce it. They are becoming saints. You too can be a saint.

Ask God to make you a saint.