Saint Lutgardis never wanted to enter a convent. However, her supposed vocation in life of marriage and children changed when her dowry was lost in a bad business deal. Since her parents didn't think they could marry her off without a dowry, Lutgardis was sent to live at the Black Benedictine convent at the age of 12. Lutgardis viewed the convent as a type of boarding house, and continued to go about her normal day-to-day business without any true vocation. When she was almost 20 she had a vision of Jesus showing her his wounds. After this vision, she knew that her true vocation was to live in the convent. She soon became a Benedictine nun. Lutgardis continued to receive visions of Jesus, experienced prayerful ecstasies, levitated, and experienced the wounds of Christ from the crown of thorns while captivated by the Passion. She wished to live a more disciplined lifestyle, so she joined the Cistercians at Aywiers where she lived for the remainder of her life. Lutgardis was blessed with gifts of healing, prophecy, and faithful wisdom. She went blind in her later years, but saw it as a wonderful gift because she was no longer distracted by the secular world. Saint Lutgardis is the patroness of childbirth and against blindness. 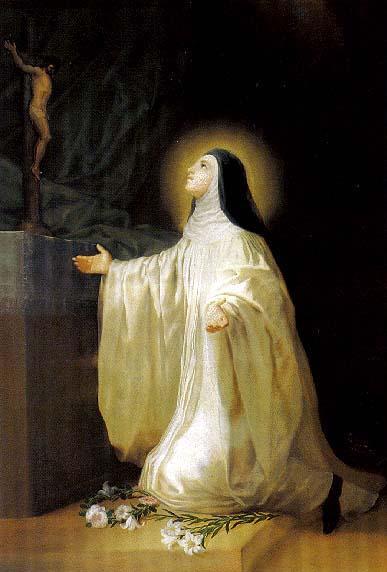 Saint Lutgardis did not ever imagine that she would live her life in a monastery. She expected an entirely different life. But, in the end, she was satisfied and deeply fulfilled by the lifestyle to which she was called. Saint Lutgardis reminds us that, many times, our initial plans won't work out. This, however, may often be for the better, as our new and ultimate plans are actually more fulfilling and meaningful to us.

Dear Jesus, help me to embrace my lot in life and accept it as an opportunity to grow in knowledge of and dedication to you.