“Saint Anthony, Saint Anthony, please come around. Something is lost and needs to be found.” You might hear this rhyme when someone has lost something, like car keys. That’s because Saint Anthony of Padua is the patron saint of searchers for lost articles. Saint Anthony is revered as one of the Church’s greatest preachers, who brought many lost people back into the faith. He had a beautiful voice and a captivating way of speaking. His homilies were well written and made people think. He was known as the “hammer of the heretics,” because his sermons helped people bring their thoughts and actions into line with Church teachings. His original reason for becoming a priest was to become a martyr. Martyrs were people who were killed because they believed in Christ. Anthony was moved by the recent martyrdom of five Franciscans. Inspired by their order’s public way of living like Christ, he left his comfortable life in Portugal to join the Franciscans in Africa in hopes of dying for the faith. His poor health, however, changed his plans. Instead, he spent his short life with the Franciscans in Italy to become one of the greatest spiritual writers of the Church, venerated for his great teachings. Less than a year after Saint Anthony’s death, Pope Gregory IX canonized him. (Taken from "The Catholic Connections Handbook for Middleschoolers.") 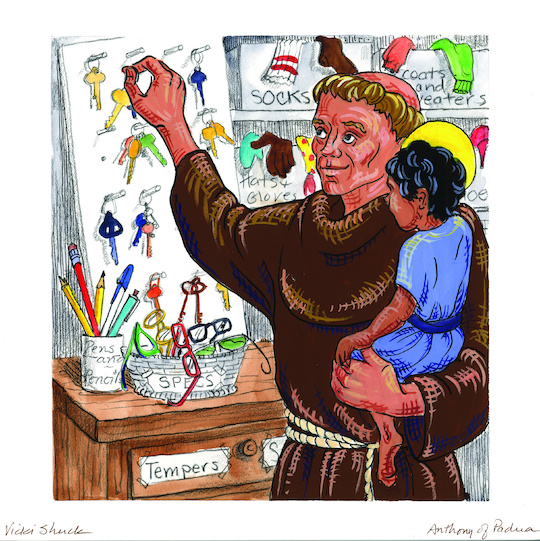 Saint Anthony of Padua expected and hoped to become a martyr. In fact, he became a priest for solely this reason, and did not expect to become a great preacher and writer. But, in the end, he was satisfied and deeply fulfilled by the lifestyle to which he was called. Saint Anthony reminds us that, many times, our initial plans won't work out. This, however, may often be for the better, as our new and ultimate plans are actually more fulfilling and meaningful to us.

Dear God, help me to appreciate whatever course my life takes and to use it to become a better person.