Saint Boniface was a Benedictine monk from England who gave up being an abbot to work to convert the Germanic tribes. He was well-known for his orthodoxy to the Christian faith and his loyalty to the pope of Rome. When Boniface went on his first German mission trip, he encountered widespread pagan worship and a corrupt and uneducated clergy. He reported his findings to the pope, and after digesting the information, the pope told Boniface to reform the German Church. Boniface was appointed a regional bishop and his reforms were very successful. However, he encountered problems in the Frankish kingdom because of secular interference in Church matters. During his last mission to share the Good News with the Franks, he and his companions were killed while readying converts for Confirmation. Saint Boniface is the patron saint of Germany, brewers, tailors, and file-cutters. 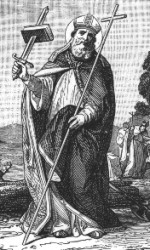 Saint Boniface devoted his life, every minute of every day, to serving God and his people. In the end, he even sacrificed his life for God. Do you think of God often throughout your day? Try to spend time every hour thinking about God and his work in your life.

Dear God, please help me to be fully aware of your presence in my life and help me to more fully devote my life to you.