Saint Cristóbal Magallanes lived at a time when there was a very anti-Catholic government in Mexico. The government had forced churches, schools, and seminaries to close. They also banished the foreign clergy. Cristóbal established a secret seminary in Jalisco. He was a member of the Cristero movement, pledging his loyalty to Christ and the Church, and spreading Jesus' message throughout the people of Mexico. This was a very dangerous action, since the government had made it illegal to be baptized or celebrate Mass. One day, on his way to secretly say Mass, Saint Cristóbal Magallanes was martyred after the government falsely accused him of provoking a rebellion. 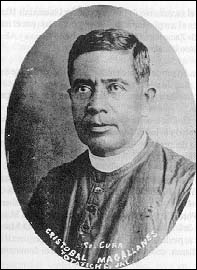 In the United States, we have the freedom to practice whichever faith we choose. The government does not usually interfere with churches, parochial schools or institutions of religious instruction. However, there are still countries that resemble the environment in which Saint Cristóbal Magallanes lived. Imagine living in conditions completely hostile to your faith.

Dear Jesus, please help those being persecuted around the world for their choice of religion. Please put an end to this persecution.