Saint Ignatius of Laconi was born to a poor farm family. At 17, he became severely ill. He made a promise to God that, if he was cured, he would devote his life to being a Franciscan. He was cured, but his father wanted him to wait a while longer before joining the Franciscan order. At 20, Ignatius was almost killed while horseback riding. He believed that God had once again spared his life and he immediately joined a Capuchin Franciscan monastery. Ignatius's traits of self-denial and charity led to his selection as official beggar for the friars. He held this position for 40 years. Saint Ignatius of Laconi often comforted the sick, visited the lonely, spent time with homeless children, and converted many sinners. 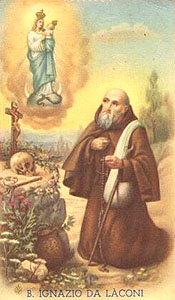 Dear God, help me to be a success as Saint Ignatius of Laconi was a success.