Even though Saint Anselm brushed religion aside as a young man, he embraced it in his later years. He became one of the Church's most important theologians and leaders. He was named "Father of Scholasticism" for trying to examine and illuminate truths of the Christian faith utilizing reason. He was appointed the archbishop of Canterbury and was named a Doctor of the Church. One of his greatest accomplishments was persuading the national council at Westminster to forbid the sale of human beings. Anselm was highly admired for his patience, kindness, and teaching ability. He published many theological works, including "Why God Became Man." 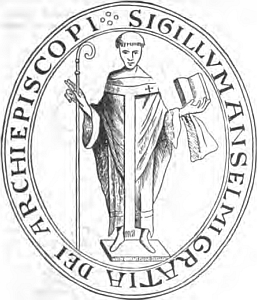 Saint Anselm played a vital role in helping to stop slavery. Even though, during his lifetime, there were few advocates for the abolition of slavery, Saint Anselm stood up for the enslaved and did what he could to improve their plight. His position was likely unpopular, but this did not stop him from arguing on behalf of slaves. What issues in your community need to be addressed but are often ignored?

Dear Jesus, please help me to live with the righteousness of Saint Anselm.