Saint Martin I became pope at a time when the emperor and patriarch of Constantinople closely cooperated with each other. This support often fueled the struggles that were going on within the Church. A teaching that enjoyed strong support in the East, from both the emperor and the patriarch, was that Christ had no human will. Not long after his appointment as pope, Martin held a council at the Lateran Palace in Rome that condemned the patriarch of Constantinople for his heresy. By condemning the patriarch, Martin in turn offended the emperor, who had him arrested and tortured. He was sentenced to death, but was spared when the patriarch repented for his false belief and teaching. Even though he was spared from execution, Martin was so weak from the torture that was inflicted upon him that he died soon after he was freed. Saint Martin I is considered the last of the early popes to be martyred. 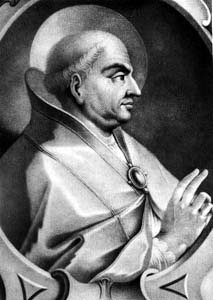 Saint Martin I was among the last popes to be martyred. For many years after the start of Christianity, religious leaders were hunted and killed. It is difficult to imagine a climate in which Christianity was so strongly despised. However, there are areas in the world today where Christians are violently persecuted.

Dear Jesus, please be with those Christians currently persecuted. Help them and their oppressors know your love.