Saint William of Eskilsoe was a renowned reformer and missionary. He was born in Saint-Germain, France, and acted as a canon at the Church of Saint Genevieve in Paris. William's reputation for holiness and discipline was so well known that the bishop of Roskilde asked him to reinstate order in the Danish monasteries. William agreed and moved from France to Denmark with the assignment of reforming the canons at Eskilsoe. He became abbot there, and spent the rest of his life reforming religious communities. 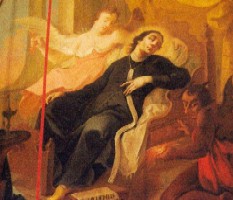 Saint William of Eskiloe was known for his holiness and discipline. These qualities prompted others to trust him and his abilities. What qualities do others know you for? Are these qualities of which you are proud and that you feel represent your faith?

Dear Jesus, I thank you for the good qualities that you have given me.