Saint John Joseph of the Cross exhibited such strong piety and devotion at a young age that he joined the Franciscans in Naples when he was only 16. His reputation for holiness provoked his superiors to give him the duty of founding a new friary even before he was ordained. John excelled at his new position and was eventually appointed provincial. Even though he held a very important position, he still helped work in the kitchen, haul firewood, and carry water. After his term as provincial ended, John Joseph dedicated his time to hearing confessions and practicing humble penances. John Joseph was blessed with the gifts of healing, prophecy, prayerful ecstasies, levitation, and bilocation. Saint John Joseph of the Cross is the patron of Ischia, Italy. 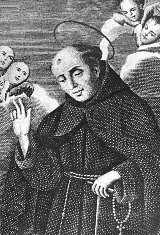 Saint John Joseph of the Cross was celebrated for his holiness and leadership skills. Even though he was selected for positions of great importance, John Joseph still helped with humble tasks. Ask the Lord for assistance staying humble and grounded when you are celebrated or rewarded for your accomplishments and talents.

Jesus, my Lord, help me to know the gifts I have and to use them for the good of others in a humble manner. Never let me take a holier-than-thou attitude; let me have a humble respect for all people. (Taken from “Take Ten: Daily Bible Reflections for Teens.”)