Saint Polycarp was a friend, convert, and disciple of Saint John the Apostle. He was also a prominent Christian leader in the first half of the second century. Because of Polycarp's level head and leadership skills, he was chosen by the churches in Asia Minor to travel to Rome and meet with Pope Anicetus to end the controversy over the date for Easter. Even after lengthy discussions, Polycarp and Anicetus could not come to a mutual agreement on the date. However, they did agree to abide by their area's local traditions, finding no differences between their Christian beliefs. At the advanced age of 86, crowds at the stadium in Smyrna cried out for Polycarp's demise. It was arranged that he be burned alive. However, the flames did not harm him and he was eventually killed by a dagger. The written records of Polycarp's martyrdom are the earliest and most reliable account of a Christian martyr's death. Saint Polycarp is the patron saint against dysentery and against earache. 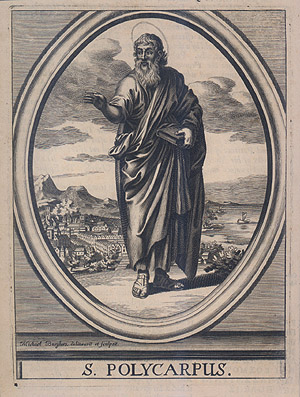 Have you heard the saying "Let's agree to disagree?" That is exactly what Saint Polycarp had to do when he and Pope Anicetus could not agree on the date for Easter. Do you "agree to disagree" instead of holding grudges and being angry when an argument cannot be settled? Ask the Lord for assistance when having a discussion or argument with another. With the Lord's assistance, you can learn to disagree and argue fairly without losing important relationships.

God, help me always to disagree and argue fairly with others in our conflicts. May I realize that winning is not the only thing. Good relationships are much more important. (Taken from “Good News Day by Day: Bible Reflections for Teens.”)