Saint Conrad of Piacenza was born into a noble family and married the daughter of a nobleman. One day, while Conrad was out on a hunting trip, he ordered his guides to set fire to a pile of brush in order to drive out the game. However, the fire got out of hand and burned down a neighboring village. An innocent peasant was blamed for the disaster and was condemned to death. Not wanting the man to suffer for his mistake, Conrad confessed his guilt and paid for the damage by selling a great deal of his property and possessions. After this event, Conrad and his wife felt called to give the remainder of their goods to the poor, and entered into separate religious orders. He lived as a hermit in prayerful solitude and was known for his gifts of healing and piety. It is said that Conrad died kneeling in front of a crucifix. Saint Conrad of Piacenza is the patron saint against hernias. 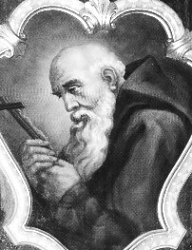 It is easy for us to pass the blame to someone else when we make a mistake. The fire that Saint Conrad of Piacenza started was blamed on an innocent peasant, who was condemned to die. Saint Conrad did not want this man to pay the ultimate price for something that he did not do, so he confessed to starting the fire and paid for the damages. Do you allow the blame to be passed to someone else when you make a mistake? Pray to the ever-forgiving Lord for help in owning up to your actions, seeking forgiveness from those you have wronged, making retribution for your actions, and always being willing to forgive someone else in return.

Jesus Christ, you came to earth to bring forgiveness to all. Empower me to not drown in evil but to ask for forgiveness, to begin again to do honorable deeds. (Taken from “Take Ten: Daily Bible Reflections for Teens.”)