Saint Catherine de Ricci exhibited a great love of prayer and a deep devotion to Jesus from a very young age. When she was six years old, her father allowed her to join the convent of Monticelli in Florence, where her aunt was a nun. After living and praying with her aunt for a number of years, Catherine joined the convent of the Dominican nuns when she was 14. She was given many responsibilities in the convent, and many people sought her prayers, including three future popes. She experienced many visions and ecstasies. When she reached the age of 20, she started receiving weekly ecstasies of the Passion of Christ from noon on Thursday until 4:00 p.m. on Friday. With these ecstasies, she also received the wounds of Jesus in the order that they appeared, from his scourging to the dent on his shoulder from carrying the cross. These ecstasies lasted for 12 years. Saint Catherine de Ricci was canonized in 1746, and is the patron saint against illness and of sick people. 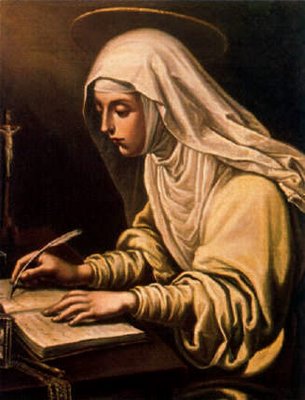 Saint Catherine de Ricci loved prayer and had a deep devotion to Jesus, starting at a very young age. She was so devout that she even bore the wounds from Jesus' Passion for 12 years. Are you as devoted as you could be to Jesus? While Jesus does not mark every follower with his wounds, would you be willing to endure some pain or ridicule for your beliefs and love of Christ? Ask the Lord to help make you a stronger disciple.

Dear God, may I always be worthy of being called a “disciple of Jesus.” (Taken from “Good News Day by Day: Bible Reflections for Teens.”)